Are you going through some hard times right now? Something unexpected happened this week that 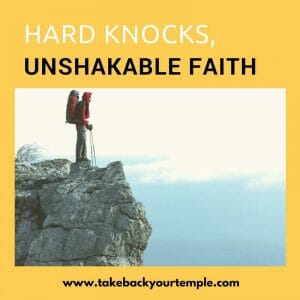 put my faith to the test.

If you take this message to heart, you too will be able to stand firm with unshakable faith when trials come.

On our drive to church Sunday, the police stopped Mike and me. My husband Mike was driving and he had just made a left turn off of the interstate exit ramp.

The police car passed us and suddenly he turned his blue lights on.

Mike said to me, “I know that is not for us” but then the officer made a U-turn to follow. Mike turned into a parking lot and sure enough, the police car pulled behind us.

We were puzzled because we had done nothing wrong in our minds. Now, the “old me” would have been overcome with fear and anxiety.

My mind would have been overwhelmed with images of all the bad things that could happen.

But the new me had a supernatural calm and peace. It was incredible. I knew exactly what to do.

But why do you call Me ‘Lord, Lord,’ and not do the things which I say? Whoever comes to Me, and hears My sayings and does them, I will show you whom he is like: He is like a man building a house, who dug deep and laid the foundation on the rock. And when the flood arose, the stream beat vehemently against that house, and could not shake it, for it was founded on the rock. But he who heard and did nothing is like a man who built a house on the earth without a foundation, against which the stream beat vehemently; and immediately it fell. And the ruin of that house was great.”

However, the man whose house was built on sand just heard God’s word and did nothing with it. He did not allow God’s word to guide his daily actions and decisions.

Jesus did not promise that we would have a trouble-free life. But He did say that we could be of good cheer because He has overcome the world!

So if you are going through trials, then you need faith that is founded on the rock (God’s word) so that you won’t be shaken.

In my case, I started praising the Lord when the police officer stopped us. God word says about Him:

But You are holy, Enthroned in the praises of Israel (Psalm 22:3).”

From this word in my heart, I knew that the Lord lives in the praises of His people. Because we needed His presence in this situation, this was the first rock on which I stood.

Then I started praying for God’s mercy:

Who redeems your life from destruction, Who crowns you with lovingkindness and tender mercies (Psalm 103:4),”

From this word in my heart, I knew that the Lord is merciful. If we had done something wrong, we needed His mercy. That was second rock on which I stood.

And I prayed for God’s favor with the officer:

For You, O Lord, will bless the righteous; With favor You will surround him as with a shield (Psalm 5:12).”

From this word in my heart, I know that the Lord bestows favor upon His people. We needed His favor in this situation. That was the third rock on which I stood.

I kept on praising and praying until the officer approached Mike’s car window.

The officer told Mike that he did not make a complete stop at the stop sign coming off the exit ramp, but just paused briefly and then kept on going. He asked Mike to slow down and said that he wanted us to get to our destination safely.

Then the officer started to walk away. He was just giving us a warning – no ticket.

Mike said, “Can I shake your hand?” The officer stuck out his hand and Mike shook it. As the officer walked away, I yelled out, “God bless you!”

The officer got in his car and drove away. Then we started praising God some more!

Mike said that he would indeed be more careful from now on. He knew he deserved that ticket and we were willing to accept the ticket if that came.

But thank God for His favor and mercy.

Regarding your weight loss goal, what rock do you have on which to stand? If you are going through any situation, you need a word from the Lord on which to stand. Otherwise, you will fall and be at the mercy of your circumstances.

In the eBook, I give specific prayers and promises of encouragement and as a rock to stand. These are very helpful, especially if you feel anxious or ever  feel like giving up in your weight loss plan.

You learn how to renew your mind to God’s word every day so that  you will develop faith that cannot be shaken as His word takes root in you.

The Bible says that the renewing of your mind transforms you (see Romans 12:2).

So resolve today to be diligent in renewing of your mind to God’s word and putting it in practice. In the day of trial, you will able to stand firm with supernatural confidence that will astonish you!