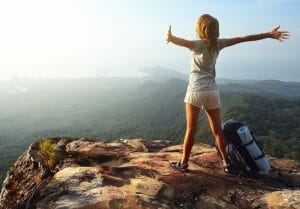 Do your emotions consume you, to the point that you try to eat them away?

A nature documentary I saw recently horrified me because it reminded me of the danger of emotional eating.

Watch the following clip. You won’t soon forget it.

Imagine yourself as the baby iguana when emotions overwhelm you.

See the snakes as the enemy’s forces trying to capture you. This creeps me out because I can’t stand snakes!

But did you notice how the baby iguana managed to get to the place of safety?

The only way she was able to get to safety was to run to the rock!

That is our battle plan when emotions overwhelm us.

Keep this scripture in mind:

From the end of the earth I will cry to You, When my heart is overwhelmed; Lead me to the rock that is higher than I.”

Now, the enemy will try to convince you that you can’t handle your emotions. What he says seems true in the moment because of the physical symptoms you may experience:

It may feel like you are going to die.

But you won’t. They are just physical symptoms.

It is your beliefs that are telling you what the symptoms mean. Fear could just as easily be excitement.

After all, the physical symptoms are the same; it is just the label you give them that is different!

You can say to yourself:

I will not die, but live, And declare the works of the Lord.”

You see, underneath every fear is the fear of death.

The next time you are afraid of something, keep asking the question: ”And why do you fear that?”

For every answer you give, keep asking ”And why do you fear that?”

At the end of your questioning, the final answer will involve death or dying in some way as in, ”And then, I’ll die.”

But as a Christian, you have no need to fear death!

Death is the enemy’s trump card, which Jesus took away through His death and resurrection.

Jesus experienced death and rose again on the third day. Death could not hold Him down!

And it can’t hold you down either.

So when your emotions seem like they are going to overwhelm you, be willing to experience those physical symptoms. Declare Psalm 118:17 in confidence because those symptoms will pass.

Get up from the place you are sitting and move.

Breathe and just be (exist).

Listen to worship and praise music to begin to shift your thinking away from the situation and on to the Lord.

Talk to your Father about it. Let Him know how you are feeling. You can even tell Him that you don’t like this feeling!

Get a piece of paper and a pen. Write the Lord about what is happening just to get the thoughts out of your head and on to paper. That will help you see your feelings objectively.

The Holy Spirit will bring scriptures to your remembrance if you have them in your mental storehouse. If not, do a Google search for scriptures to comfort you in the emotion such as ‘Scriptures for depression’.

Just keep breathing until the physical symptoms pass and the Lord’s peace settles upon you.

That is running to the Rock and standing on it.

On the Rock is the place of safety. Get there and stay there!