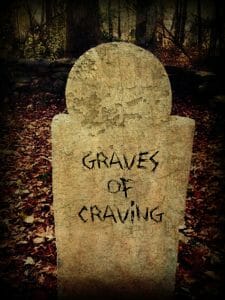 “Many people spend their lives chasing after cravings.”

Mike and I had an interesting conversation recently about hunger vs. craving. We were studying Numbers 11:4-35 in which the children of Israel had a intense craving for specific foods they ate back in their slavery days.

The end result? The “graves of craving.” You’ll learn more about that later.

In our study, we looked up the word craving: “A strong wanting of what promises enjoyment or pleasure.” The word “promise” stuck out at me.

Whenever you have a craving, take a moment to pause and peek behind the curtain. What promise are you expecting that food to fulfill?

If you are not hungry, then that promise is attracting you. That is why our imagination about how good something is going to taste is often better than the reality.

Through yielding to the craving, we feed upon that promise!

The following is a Bible study I wrote about Numbers 11:4-35. If you are struggling with food cravings, then this is a must read.

Let me give you some background for this study. The children of Israel started out in slavery in Egypt. Exodus 1:13-16 tells us what their lives were like in Egypt:

“So the Egyptians made the children of Israel serve with rigor. And they made their lives bitter with hard bondage—in mortar, in brick, and in all manner of service in the field. All their service in which they made them serve was with rigor.

Then the king of Egypt spoke to the Hebrew midwives, of whom the name of one was Shiphrah and the name of the other Puah; and he said, “When you do the duties of a midwife for the Hebrew women, and see them on the birthstools, if it is a son, then you shall kill him; but if it is a daughter, then she shall live.”

While the midwives did not obey the king, can you imagine the fear that Hebrew expectant mothers still had to live with during that period, especially if they gave birth to a son?

Exodus 2:23-25 tells us how the people responded to their misery:

Most of us know the story of how God raised up Moses to deliver the people from slavery and lead them out of Egypt. The people had seen God’s power work in miraculous ways. They were now on their way to the Promised Land, the land of milk and honey.

However in Numbers 11:4-6, the people cried out again but for a different reason:

“Now the mixed multitude who were among them yielded to intense craving; so the children of Israel also wept again and said: “Who will give us meat to eat? We remember the fish which we ate freely in Egypt, the cucumbers, the melons, the leeks, the onions, and the garlic; but now our whole being is dried up; there is nothing at all except this manna before our eyes!”

The people were free from slavery. And yet here they were, weeping over food!

I could understand the crying if they were hungry. The dictionary defines hunger as “a feeling of discomfort caused by lack of food, coupled with the desire to eat.” Hunger is natural and food is meant to satisfy that.

But the people did not lack food. God was feeding them to the full to satisfy their hunger. He gave them manna, which Psalm 78:25 called “angel’s food.”

The people were weeping because they weren’t in a position to chase after their cravings. Notice that they craved healthy food. So the food itself was not the problem in that case.

The problem was that they were not thankful for the food that God had provided for them. Their desire to chase after cravings would have taken them back to a place where the Lord did not want them to go.

The people’s attitude displeased the Lord and he said to Moses:

“Then you shall say to the people, ‘Consecrate yourselves for tomorrow, and you shall eat meat; for you have wept in the hearing of the Lord, saying, ‘Who will give us meat to eat? For it was well with us in Egypt.’ Therefore the Lord will give you meat, and you shall eat. You shall eat, not one day, nor two days, nor five days, nor ten days, nor twenty days, but for a whole month, until it comes out of your nostrils and becomes loathsome to you, because you have despised the Lord who is among you, and have wept before Him, saying, ‘Why did we ever come up out of Egypt (Numbers 11:18-20)?'”

Did you get that? The Lord said that the people’s cravings led them to start questioning whether it was good for them to come out of slavery! They told themselves, “It was well with us in Egypt.”

The devil is a liar! We just read about all the things these people suffered in slavery. It was not well with them in Egypt.

Ask yourself: “Do I tell myself lies to justify staying in food bondage? ” I once did.

If you remain in food bondage, then a part of you is lying to yourself, “It is well.”

The people asked themselves: “Why did we ever come up out of Egypt?” The Lord once told me that forgetfulness is the enemy of faith. So when you find yourself in doubt and ingratitude, it is good to remind yourself about all the Lord has delivered you from.

This is my reality check for the children of Israel as to why they came up out of Egypt:

So were things really well with you in Egypt? I think not!

The Lord did exactly what He promised. He gave the people meat to eat per their cries. But Numbers 11:33-34 tells us what happened next:

But while the meat was still between their teeth, before it was chewed, the wrath of the Lord was aroused against the people, and the Lord struck the people with a very great plague. So he called the name of that place Kibroth Hattaavah, because there they buried the people who had yielded to craving.”

How many Christians have been buried in graves of craving? They have spent their lives chasing after cravings. But those cravings led them to places where God did not want them to go: to diabetes, strokes, heart attacks, and other diseases.

Psalm 78:32-33 tells you the end of the Israelites who chased after craving:

In spite of this they still sinned,
And did not believe in His wondrous works.
Therefore their days He consumed in futility,
And their years in fear.”

He wants us to have days full of purpose, performing good works that add value to others. This glorifies God:

For we are His workmanship, created in Christ Jesus for good works, which God prepared beforehand that we should walk in them (Ephesians 2:10).”

He wants our years consumed with love for Him and for our fellow man. Only God’s perfect love can cast out fear:

To avoid the grave of craving, ask yourself:

When you chase after God rather than craving, you will boldly say: “I shall not die, but live, And declare the works of the Lord (Psalm 118:17).”

Be blessed in health, healing, and wholeness,

Kimberly Taylor
Creator of the ‘Take Back Your Temple’ program