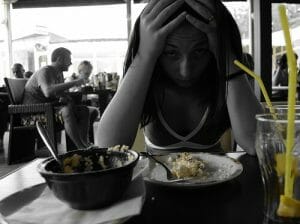 The Pitfall: This mistake often happened when I had promised I was only going to eat a certain amount, but then discovered I had eaten a lot more than I had intended right in the middle of my eating.

A terrible feeling would come over me, even depression.

I’d think, “Why even bother trying to change? I’m only going to keep on failing. I might as well just eat the rest of it since I failed anyway.”

And I would eat the rest of it.

I decided that calling myself as a failure for one mistake made about as much sense as stumbling on some stairs, then deciding to throw myself down the rest of the stairs!

All that would do is make me want to quit.

The Change: I love this saying from the martial arts: “The best way to win a fight is to avoid getting into one in the first place.”

So I don’t serve myself large portions anymore. I’ve learned all they will do is make me have to fight myself to avoid finishing it all.

I’ve found it much easier to just serve myself a right-sized portion or if eating out, to make sure that the food in front of me fits my stomach size (about the size of my fist).

On the occasions in which I did eat more than I intended, I stopped the minute I came to my senses. I don’t keep on eating. I now know that failure is an event, not a person. So I  gave myself permission to make mistakes as I discovered what works for me.

I practiced this Biblical encouragement in Proverbs 24:16:

For a righteous man may fall seven times And rise again…”

The important thing is to learn from my mistakes. If it is a mistake I make repeatedly, I ask God for His wisdom and insight into what could be going wrong and strength to do what is right. Prayer is two-way communication; I speak but I also listen to the Lord speak and do what He says.

I  decided that I cannot fail as long as I am still breathing!

As long as I had breath, I had hope. My new attitude was, “If I’m breathing, I’m believing!”

The only way to fail is to quit. Quitting increased the chance to 100% that I would NEVER get what I wanted. So if I only hung on to my vision and hung in there, I would reach my goal eventually.

And one final word: Once you reach your goal, one of the biggest temptations is to get complacent. You might think, “I’ve arrived and I am glad I don’t have to do that anymore.” That is huge mistake – and a guaranteed way to regain the weight you lost!

Instead, I practice this quote by author Rory Vaden and I pray you do the same:

“Success is not owned, it’s only rented; and the rent is due every day.”

Did you enjoy these pitfalls? You can check others here:

P.S. The Bible says that we are transformed by the renewing of our minds. To succeed with weight loss, I had to learn to think differently.

In the Take Back Your Temple Program, you will learn how to think like a weight loss success story so that you can lose the weight for good.

Click here to learn more about the Take Back Your Temple Program.