I was shocked to find the following message on a website, in which a Christian man wrote about being overweight: 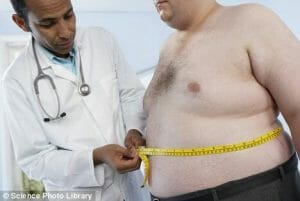 The moment I looked in the mirror I realized I was insulting the God I love and who I’d pledged my life to serve…The single moment of greatest shame, sorrow, rage, and self-loathing of my entire life…278 lbs.”

The man’s post made me wonder if there are other Christians who think the same way.

While I empathize with this man’s feelings, the thought behind them is a lie straight from the pit of hell.

Forgive me if I sound angry about this, but the thought of Christians accepting the enemy’s lies as the gospel truth makes me mad.

Sometimes we accept these lies out of ignorance because we don’t know what God’s word says.

But other times, we accept the lies when we believe our feelings (which the enemy can manipulate) above God’s word.

The only way to combat these lies is with the truth.

To prove that being overweight does not insult God, I must go to the Bible. In the Bible, I can only think of 2 individuals who were described as “fat.” One of them was God’s priest. Even though God rebuked him, the rebuke was not because he was “fat.”

Having the proper perspective about the size issue is essential to reaching your ideal weight permanently. While condemnation can motivate you to change temporarily, it won’t last. You’ll end up feeling hopeless ultimately.

Permanent changes must be motivated by love. God want us to bring every concern to Him – including weight issues.

Most of these originate from the heart, not the body.

Keep your heart with all diligence, For out of it spring the issues of life.”

I have read some quotes from older Christian weight loss resources that said things like “Whenever you see a fat Christian, you’re looking at one who is not walking with the Lord” and “Slim is how God meant us to be.”

The Bible supports neither of these statements. They promote the idea that your outward appearance is an indication of your Spiritual condition. But appearances can be misleading.

For example, the religious leaders in Jesus’ day looked good. But He said to them, “Woe to you, scribes and Pharisees, hypocrites! For you are like whitewashed tombs which indeed appear beautiful outwardly, but inside are full of dead men’s bones and all uncleanness (Matthew 23:27).”

God is always more concerned about the contents of a person’s heart above what they show on the outside.

Another example is David’s selection as Israel’s future king. At first,  the prophet Samuel assumed that David’s older brother must be the one that the Lord had selected. After all, Eliab looked the part!

However, 1 Samuel 16:7 tells us differently:

But the Lord said to Samuel, ‘Do not look at his appearance or at his physical stature, because I have refused him. For the Lord does not see as man sees; for man looks at the outward appearance, but the Lord looks at the heart.’”

In fact, I don’t recall anywhere in the Bible where a person was rebuked about their weight. The only two stories I remember in which it was even noted that the person was obese was Eli the priest and Eglon, King of Moab in the Old Testament.

But the weight was just mentioned as a description of the person; it is not written that God Himself judged them for their excess weight.

In Eli’s case, God rebuked him because he failed to control his corrupt sons. This was a heart issue on Eli’s part – not an issue of the body.

Returning to the Christian man who posted that his appearance was insulting God, I found out in a later message that the man had gained weight in the first place because of a heart issue; he had learned that the woman he was to marry didn’t really love him.

The man used food to smother his grief over his lost love. He used food to try to fulfill a role in his life that the Lord was supposed to fill.  According to Psalm 147:3,

He heals the brokenhearted And binds up their wounds.”

Now, you may ask: Is there any situation in which your body’s condition does matter, apart from its appearance?

I would say “yes.” Here’s a quick story:

Once there was an old, Southern church in disrepair. The members worshiped the Lord with all their heart.

But there was one problem; the members neglected to pay the church’s electric bill. Their electricity was disconnected during a heat wave with temperatures exceeding 100 degrees Fahrenheit.

Would that scorching heat impact the people’s ability to worship during the Sunday service? Highly likely! Although the spirit is willing, the flesh is weak.

To me, the best reason to achieve and maintain your ideal weight is not for appearance sake; it is being able to fulfill your Spiritual purpose with energy and vitality – free of physical distractions. Eating healthy and proper exercise are a key part of that goal, necessary body maintenance while you are here on this Earth.

This is more important than maintaining your household dwelling. After all, you take your body with you wherever you go!

In summary, having excess fat on your body does not insult God. However, I do believe God is grieved when we don’t trust Him with our concerns and instead trust in other things to comfort ourselves.

Hear the Lord’s heart in this matter from Jeremiah 2:13:

For My people have committed two evils: They have forsaken Me, the fountain of living waters, And hewn themselves cisterns—broken cisterns that can hold no water.”

Emotional eating is ultimately a broken cistern that can’t hold water. But when you put your trust in the Lord, He will heal you emotionally and physically – the best of all worlds!

Kimberly Taylor
Creator of the ‘Take Back Your Temple’ Program

P.S. If you are tired of trying diet after diet, losing the weight, but gaining it all back then the Take Back Your Temple program is your solution. You grow stronger Spiritually and heal emotionally as you are losing weight.

Diets can give you information about how to eat but they can’t give you the wisdom nor power to destroy the mental strongholds that are holding you back.

Click the link below to learn more. Let’s do this together:

Take Back Your Temple program