What you do NEXT 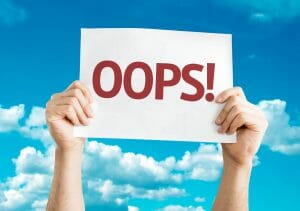 Have you ever done something that you knew you shouldn’t do, but pretended that you didn’t know and did it anyway?

Yeah, I had that experience with my eating a couple of weeks ago.

I know full well that I am allergic to wheat-based products. But I pretended I didn’t know and ate lots of bread stuffs anyway for 1 week.

Boy, did I pay for it the next week!

Not only did I gain 3 pounds in that week from water retention, but it caused sinus issues leading to post-nasal drip, throat irritation, and coughing at night, interfering with my sleep.

Once I realized that I messed up, I faced a big decision: “What do I do next?”

I believe that what you do next in the face of mistakes makes one of the biggest differences between success and failure in your weight loss goal.

Consider this: When you play a sport and you mess up while the game is in progress, one fact remains:

You still have to play your next shot.

When you mess up in life, that fact applies too:

You still have to make your next move.

Your next move can help you ascend to even greater heights or it drag you into a downward spiral that makes it hard to recover.

Let’s take a look at the story of the Prodigal Son and how he recovered from his “Next.” I’ll also share what I did in my “next” so that I’m in a stronger position today with my weight maintenance.

You can do the same thing.

Luke 15:11-24 tells the story of a man with 2 sons. The younger son became impatient to receive his inheritance, so he asked his father to give it to him. The father did as his son asked.

But the young man went into a far country and wasted all of his money on foolish, self-indulgent living. Eventually, his money ran out. A famine arose in that land. The young man found himself starving and was forced to work for a citizen of that country, feeding swine in order to survive.

But when he came to himself, he said, ‘How many of my father’s hired servants have bread enough and to spare, and I perish with hunger! I will arise and go to my father, and will say to him, “’Father, I have sinned against heaven and before you, and I am no longer worthy to be called your son. Make me like one of your hired servants.”’

The phrase, “But when he came to himself” is important because it implies that the young man had forgotten or ignored a truth about himself.

While the young man had departed from the truth before, he now had an opportunity to return to the truth and live in it. That’s the power of “Next.”

Now, the young man could have continued in the same low state. He could have allowed fear to rule him and say, “I can’t go back. My father will never forgive me.”

But instead, he was courageous. Instead of assuming how his father would respond, he decided to get up and find out. He returned to his father’s house, humbled himself and asked for forgiveness.

The young man’s actions paid off; his father received him gladly, forgave him, and restored him to his rightful position.

We too can be like the compassionate father. We can forgive ourselves for our mistakes and restore ourselves back to our rightful positions.

I believe that our rightful position as children of God is to prosper and be in health as our souls prosper.

That means making daily choices that are consistent with that position.

In my case, I threw out the bread stuffs that I had purchased (2 types of crackers) so that they wouldn’t be a temptation for me.

Mike had baked some bread also that I ate, so I kept it out of my sight so that I wouldn’t be tempted by it.

I drank lots of water and green tea to flush my system of the irritants. I continued eating lots of vegetables, moderate amounts of high fiber fruit, and lean protein to restore my energy and strength.

Above all, I documented how sick and stuffy I felt physically in my journal from eating bread stuffs  and how long it took to recover from it. In that way, it wouldn’t be as easy to pretend to forget the next time I’m tempted to do that.

I’m happy to say that I feel so much better now!

The truth is that I have one life to life. I don’t want to go through my life sick and bloated if I can help it. Now that I know the truth about how my body reacts to certain foods, I don’t have to. The choice is mine.

How about you? Are you taking full advantage of your “Nexts”?

Take a lesson from the Prodigal Son and don’t allow your mistakes to make you bitter; use them to become better!

Be blessed in health, healing and wholeness,

P.S. Now that you realize that your weight and health are not as good as they could be, what will you do Next? I encourage you to enroll in the Take Back Your Temple online weight loss program.

In this program, you’ll gain the knowledge and skills to lose weight and maintain it from life using the Bible key for transformation: Renewing your mind to God’s truth about health and wellness.

Click here to learn more about how the Take Back Your Temple online weight loss program can help you lose weight and feel good about yourself.